Beyond the Age of Waste: Meet the designers creating a circular future in Mauritius

Mahendra Gooroochurn lives on an island that Mark Twain supposedly compared to paradise on earth. Was Twain right?  In Mauritius, people of diverse cultures live in harmony, near blossoming pink sugarcane, beautiful pearly-white beaches and indigenous forests. But all is not what it seems: paradise is in crisis.

Energy usage and waste-generation are rising, as is the use of fossil fuels, with predictable consequences like last year’s devastating Wakashio oil spill. Beyond that, imported fast fashion in a country with a local textile industry is a growing concern, especially in the context of the Covid-19 pandemic, which has had enormous consequences for some of the island’s main hard currency earners. Tourism, in particular, has come to a standstill.

Mauritians wonder how it will all return to normal, if, indeed, it ever will.

Seeing these problems as an opportunity, Mahendra, who is an engineer and teaches at the University of Mauritius in Reduit, says the question should be: How do we make the economy flourish while protecting the environment? The answer, he says, may lie in the circular economy rather than the current linear economy dominated by the take-make-waste approach of using natural resources that are putting the planet’s health at risk. 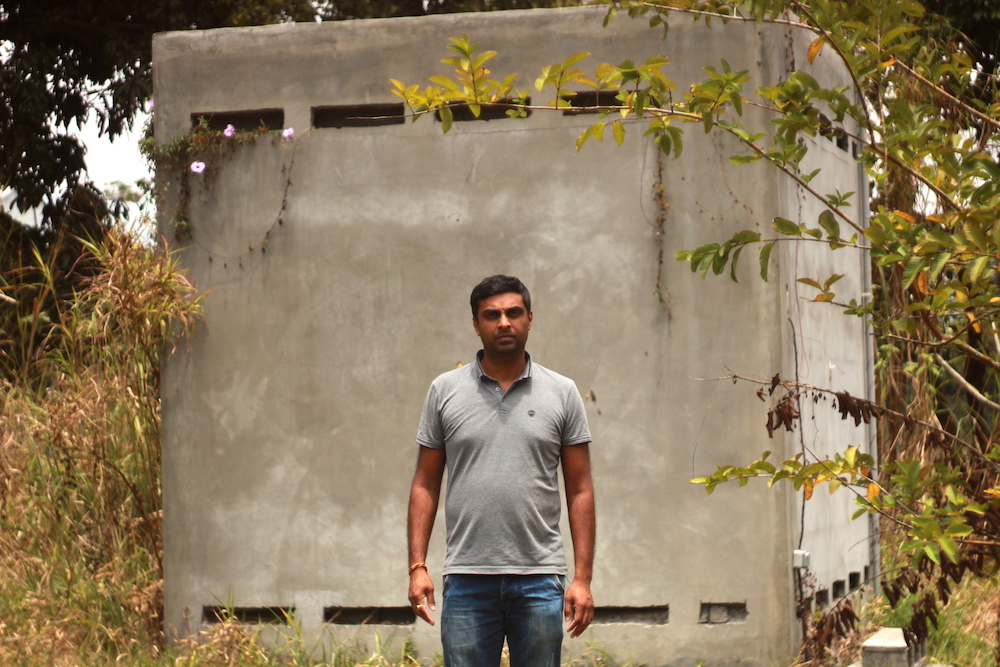 “A circular economy,” he says, “is based on the principles of designing out waste and pollution, keeping products and materials in use, and regenerating natural systems.” By using circular principles, products are made to last and to be reused and recycled. He is developing prototypes of green buildings that require minimal maintenance even in high-rainfall Mauritius, and which allow for better airflow for cooling during sweltering days.

It won’t be easy to radically change the system we’re used to, but when we start somewhere, we start seeing changes

But is it possible to convince people so used to the linear economy of the importance of a circular economy? Tenacious and passionate, Mahendra has a few plans. First, he is hosting workshops with people from all walks of life and working across multiple industries. These workshops, the first of which took place last year, are an opportunity to share information gathered from attending the 2019 UK-based Circular Design Lab, which followed the Ellen MacArthur Foundation’s circular design framework. Another project in the pipeline is a Maker’s Lab where designers and entrepreneurs will work together on new ideas and prototypes. “It won’t be easy to radically change the system we’re used to, but when we start somewhere, we start seeing changes.”

Difficult as it is, Mahendra sees reason for optimism. For his first workshop, he invited some creatives to participate and, to his surprise, most were involved with each other’s projects in some way. “This is exactly what Mauritius needs,” he says. “If everyone works in isolation, they will never know how they can help each other to reduce their footprint. If we want a circular economy, we need to be able to sustain each other.”

Here are a few of Mahendra’s circular design collaborators (See the film below): 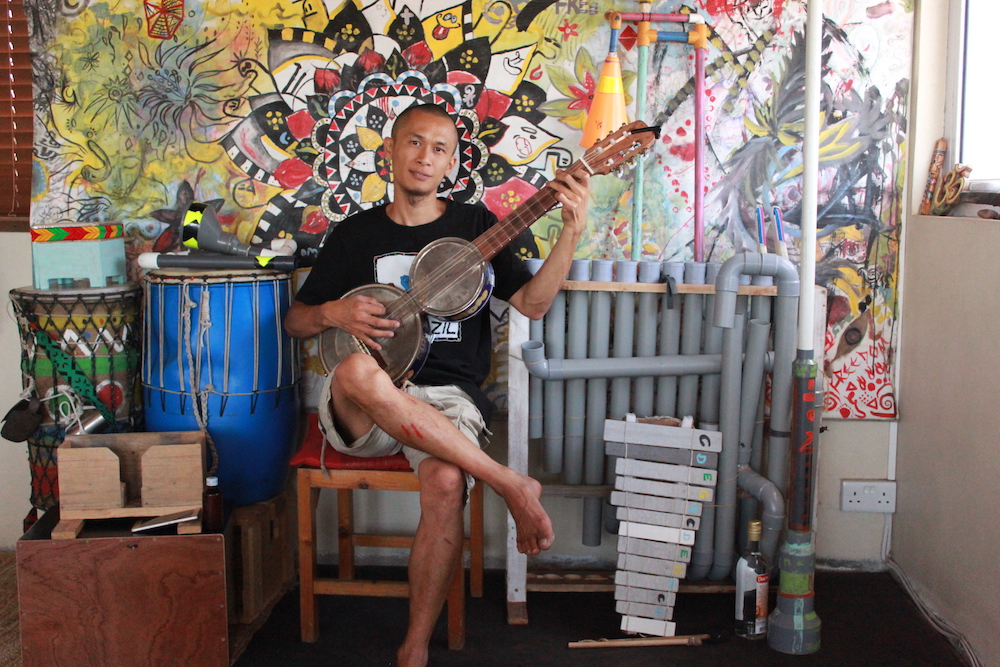 “I make music instruments from trash.” Kan Chan Kin takes great pride in his Trash to Music project, giving new life to the everyday waste that people believe to be useless. He often collects the waste while out walking or jogging barefoot and picks it up, all too often, he says, near a “No Dumping” sign.

Kan turned to upcycling in 2017 when he couldn’t find a didgeridoo, the Northern Aboriginal musical instrument he wanted to play. He has since made many differently shaped didgeridoos, guitars, xylophones and other instruments, all from waste. “I craft my instruments at home,” he says, showing me around his collection of found trash. Carefully stored on shelves and in buckets, are plastic bottles, wood, pieces of ceramic tiles, and bits of polyvinyl chloride (PVC plastic) tubing. Didgeridoos are traditionally made from hollow eucalyptus wood, but Kan figured that by using PVC pipes he could create his own version of the instrument. With PVC, he makes didgeridoos in all shapes since it is such a malleable material.

Mahendra says that Kan’s practice of upcycling waste into instruments and producing fabulous music out of them is really inspiring and has been the show stealer for workshops and seminars. In 2021, Kan plans to invest more time in using his YouTube channel to educate and sensitise people to the consequences of plastic litter. In his 2019 Tedx Talks video, he says, “By not reacting, we accept to be passive and we are silently supporting the current situation.”

We love Kan because he: 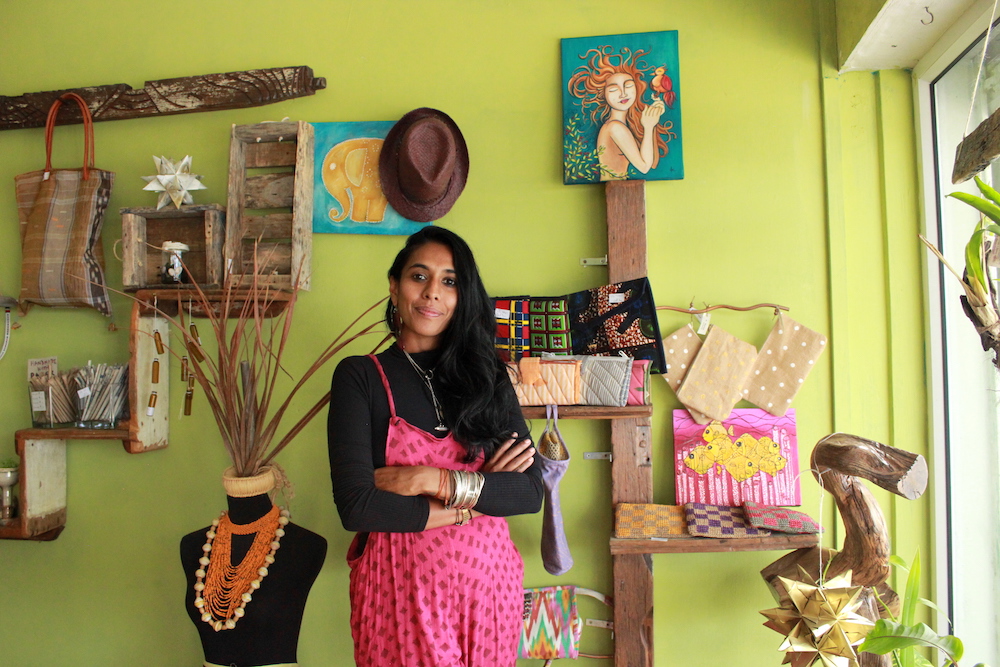 In 2012, Priya Ramkissoon converted a 100-year-old building into a temporary pop-up store, which she named Imiloa, a Hawaiian word for “discovery”. What started out as the first pop-up soon developed into the island’s first concept store, which Priya says, “is now a hub for supporting, building, and creating avenues, knowhow, and employment for creatives, and for empowering entrepreneurs and women.”

The shop stocks Indian, Mauritian and African artisanal goods, all handmade or upcycled from waste fibres. These include a collection of jewellery made of recycled magazine paper, pens made from recycled newspaper and textile waste, woven baskets and pouches made from fabric waste, and recycled paper that is embossed with pressed flowers. The fibre from the Vacoas tree (Pandanus iceryi), endemic to Mauritius, is popularly used for making hats. Pineapple, banana and coconut fibres are other natural fibres commonly used in Mauritius.

Priya believes that what is being done at Imiloa serves not only to preserve traditional crafts, but to infuse consumers and makers with greater consciousness about sustainability and the environment.

Imiloa preserves skills and recognises the work of craftspeople and artisans, bringing culture and a sense of belonging to these practices, something that Mahendra says “is central to the success of circular design and brings enriching and meaningful material narratives to our practices. With it, we stand a good chance of changing mindsets.”

“As we seek to re-integrate circular design practices in our professions and livelihoods, we will find ourselves bringing back these unique and context-specific ways of doing things. They provide powerful levers, representing our roots and our identity and will help bring about the desired transformation we want to see,” says Mahendra.

We love Imiloa Collective because it: 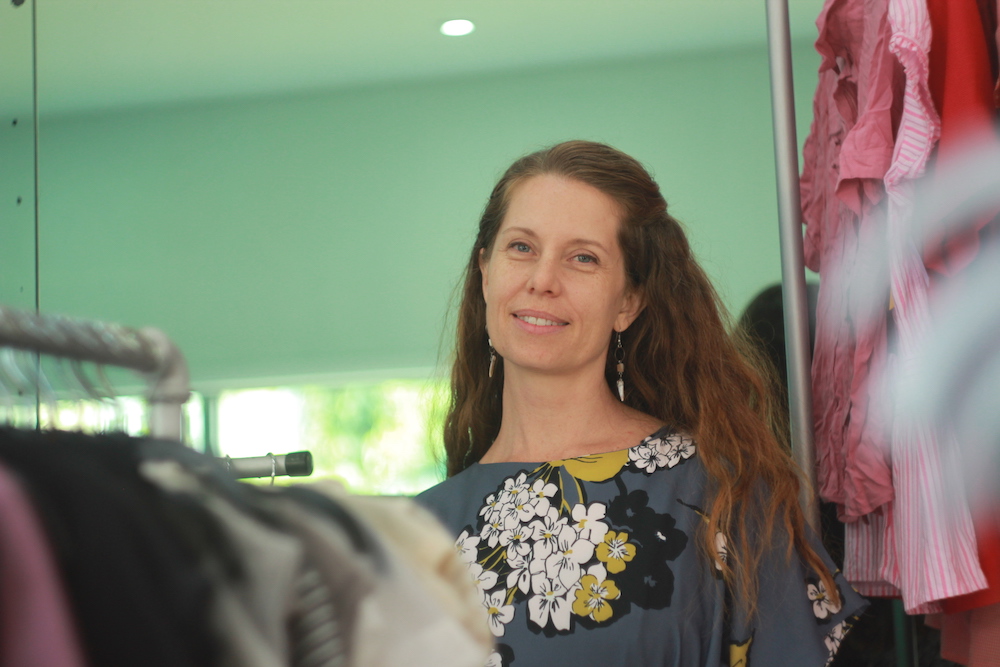 The Good Shop as a social enterprise changes both lives and the environment. People donate clothes and household equipment. These are upcycled before being sold or donated to charities. Working with The Repair Station, a collaboration with Imiloa, otherwise unusable goods are repaired to avoid any wastage. In partnership with the NGO, Inclusion Mauritius, The Good Shop employs people from communities who face barriers to employment, mainly disabled people and youths who have not had the opportunity to complete their education.

Last December, The Good Shop launched its first children’s collection made from clothes that would have otherwise become textile waste. Founder Sarah Trudeau says: “Sometimes, we receive items with minor damage – a button is missing, or there is a small hole. Our seamstresses mend the clothes, which are sent to our shops as good as new”.

With three shops already operating in Mauritius, Sarah has plans to open a new shop every year over the next five years. This is good news as part of the revenue also goes towards NGOs and scholarships.

We love The Good Shop because it: 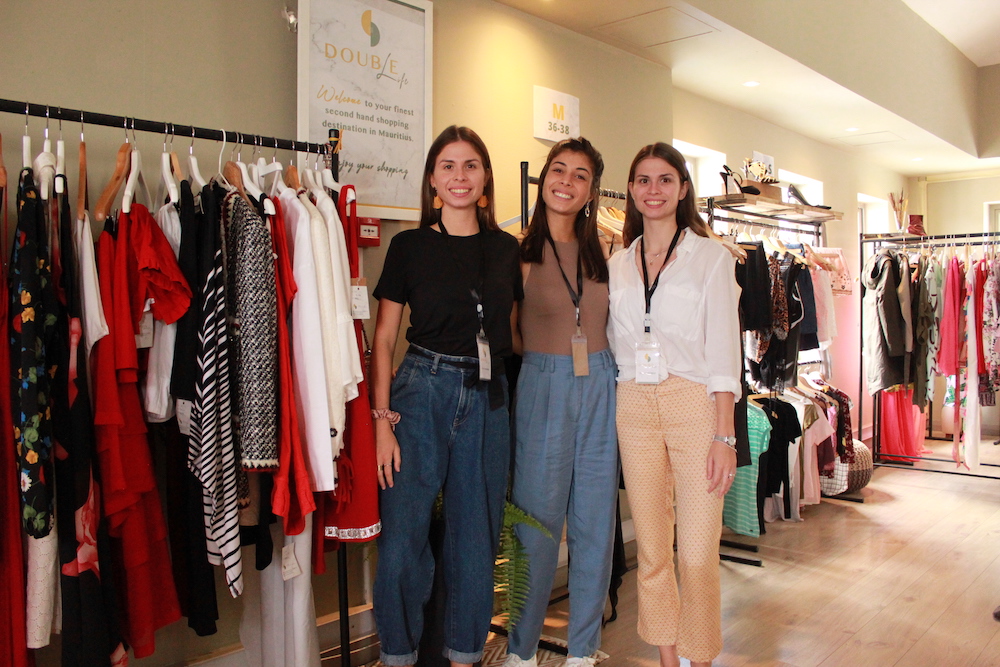 The bustling streets of Mauritius’ bigger towns are packed with vendors selling imported clothes. “Port Louis is where you can find cheap imported polyester clothes and fabric. The city may as well be the island’s capital of fast fashion,” says Diane Lautenberg, co-founder of Double life Consignment and national coordinator of Fashion Revolution Mauritius.

The project was started to reduce wastage in a fashion industry that produces too many items for people who wear them only once, or never at all. Along with her twin sister, Lena, and friend, Julie Philogene, Diane collects branded clothes, shoes and accessories that are still usable to sell in their pop-up shop, mostly at less than half the original price. The shop remains open for a few days in a strategic area of the island before moving somewhere else. The three women don’t want Mauritians to throw away clothes: “The moment a good wearable item is thrown into a bin, we have failed the first step towards a circular economy.”

In the hierarchy of circular practices, Mahendra believes that reusing “old” items must come first. Upcycling and recycling still generate some waste so the best thing to do is to find a way to reuse an item before breaking it down to create something new. This project fits Mahendra’s vision of a circular economy perfectly. “Their work is an inspiration for similar circular ventures in other areas,” he says.

We love Double Life Consignment because it: 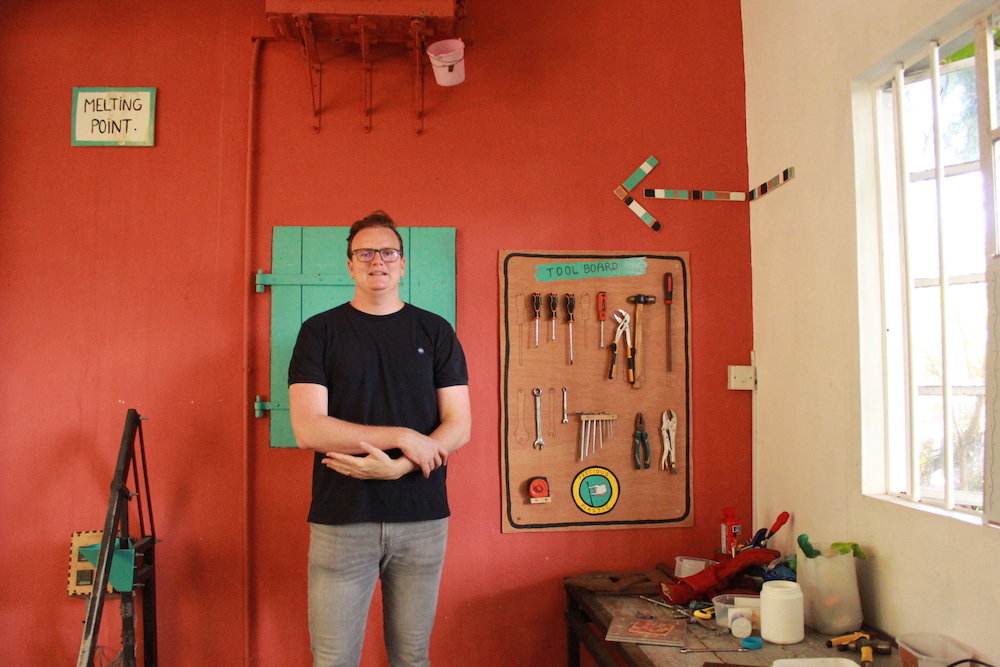 In January 2021, the Mauritian government banned a variety of single-use plastic products, starting with 10 products, including plastic cutlery and straws, with more due to be added in April this year. But what about the products that are not single use? Precious Plastic Mauritius, which is part of the global Precious Plastic organisation, has a plan for them.

In a small atelier on the south east coast of the island, Valery de Falbaire recycles plastic products. By melting down plastic donated and collected from roadsides, he and his team create phone cases, tiles and sports equipment for children, and paddles for professional swimmers. He also has plans to produce bigger products such as bricks, chairs, and tables.

“Plastic is such a versatile material and so easy to work with. It only takes a few steps to create a product and it dries almost instantly. So much can be done in a small amount of time,” says Valery.

In response to a recent increase in unemployment, he is expanding his atelier to create more work opportunities.

One of his ambitions is to prevent more plastic from being dumped into the island’s only landfill, Mare Chicose, and into the ocean. Precious Plastic changes perceptions about plastic waste. Valery says, “We want to show that plastic can be used to create everyday life products. Through this process, we will be able to reduce plastic waste considerably.”

Mahendra believes that the work done by Precious Plastic makes a significant contribution to the protection of the environment. “By taking plastic out of the waste stream and the ecosystem, Precious Plastic has shown that it is possible to make responsible use of it and avoid the drastic consequences we have seen.”

We love Precious Plastic because it:

The work of these creatives shows the need for synergy and concerted action to make things happen in an impactful and lasting way. Mahendra says, “All actions that underpin circularity link people together to create new kinds of value chain, and scaling this up across various sectors in Mauritius will provide powerful levers to bring about the desired transformation we want to see. This synergy should be based on holistic and ethical principles, so that the circular economy is engineered for the good of society at large and endures.” 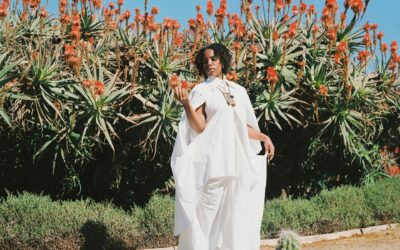 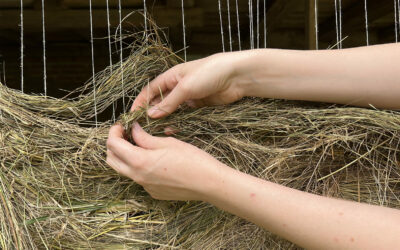 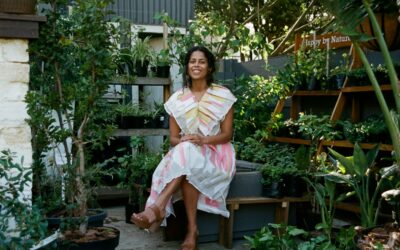