Make it Better: Join the climate strike and Fridays for Future movement

Until very recently I held the belief that we were all responsible for the environmental breakdown and climate change we’re currently experiencing. I believed that if we multiplied the small actions of billions to live simpler, more sustainable lives, our world could change.

To an extent I still believe that. But I no longer believe it’s the only way.

According to the Carbon Majors Report, just 100 companies in the world are responsible for over 70% of emissions associated with global warming since 1988. Many, if not all of them, have known for decades that the burning of fossil fuels leads to global warming. For example, fossil fuel giant Exxon Mobil has recently been exposed for spending copious amounts of money and time to “manufacture doubt” about the reality of global warming and climate change. Since the 1970s Exxon’s own scientists have been warning the company that fossil fuels contribute to global warming.

While fossil fuel companies use their muscle to buy support and spread doubt, governments are turning a blind eye, more misinformation is being spread and the transition to a decarbonised economy is happening far too slowly.

According to the recent IPCC report released by the world’s top climate scientists, we have under 12 years to cut our emissions by 45% in order to prevent global warming from passing the 1.5° mark. If we fail to achieve this, run-away climate change will unleash catastrophic consequences and a potentially apocalyptic reality enabling our own extinction.

Scary stuff. But the truth is, it is not too late to turn things around. Considering the urgency and gravity of the changes we need to make, small, personal changes are not enough. Giving up plastic, cycling to work and taking shorter showers might give me a sense of agency but we need grander efforts to change the world.

Small actions must be paired with non-violent, direct action. We need to use our economic, political and physical power to achieve a goal without resorting to violence. Taking to the streets and protesting government inaction, lobbying for fossil fuel divestments, organising sit-ins and occupations and taking legal action are some of the options we have to persuade people in powerful positions to make big, sweeping changes. We need governments to impose regulations on fossil fuel companies, facilitate a change from dirty to clean energy, solutions to plastic pollution, build public transport systems…

So who is taking the lead to demand these changes? In the last few months, we’ve seen an increase in the number of student and school children protest around the world.

The brave actions of one young girl, Greta Thunberg, who has been sitting outside the Swedish parliament every Friday for five months, have grown into the global #FridaysforFuture movement. [Thunberg, who is 16, was nominated for the Nobel Peace Prize last week.] The movement now spans over 90 countries around the world. On Friday, 15 March, there will be a global climate strike.

While youth climate activism is nothing new, Greta has inspired young and old (including myself) to take direct action on government’s inaction on climate change.

Ahead of the global strike on Friday, here are some of the youth schooling us on the how-to’s of climate activism. Details of local marches are below.

Inspired by Greta, Leah has been skipping school every Friday to strike against government inaction on climate change. She started Fridays for Future Uganda and has been mobilising youth in her community to take action. She works with Green Campaign Africa, an organisation that “rallies people of common interest together to push for urgent climate action” and to #KeepMamaAfricaGreen. 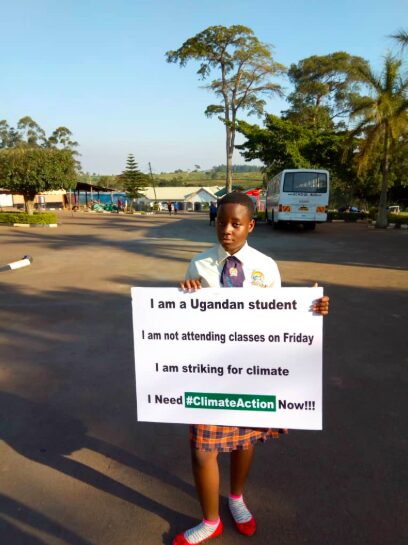 Jamie Margolin is a “Columbiana” climate activist and founder of @ThisisZeroHour, “an intersectional movement of youth activists fighting for a liveable planet for all.” She started taking action in her home state at a young age, joining 12 other young people in Washington to file a constitutional climate action lawsuit against the state and several state agencies for their refusal to take sufficient climate action.

Xiuhtezcatl is an indigenous environmental activist, hip-hop artist and youth director of Conservation organisation Earth Guardians which “trains diverse youth to be effective leaders in the climate and social justice movement using art, music storytelling, civic engagement, legal and direct action to advance solutions to the critical issues we face as a global community.” He is also one of 21 Juliana plaintiffs involved in suing the government for failing to act on climate change. He released his first a hip-hop single in 2017.

Yola and Ruby are two of the speakers at the upcoming Cape Town youth climate strike on 15 March in front of parliament. Ruby, a matric learner at Wynberg Girls’ High School, called for the strike and has been mobilising schools in Cape Town to join the global movement. Yola, from Yomelela Primary School is a member of the Earthchild Project. She says, “We are the voiceless future of humanity… Thousands of us have taken to the streets in the past weeks all around the world… We will not accept a life in fear and devastation… We are going to change the fate of humanity, whether you like it or not!”