A tale about a transcendental, all-female realm populated by complex heroines, the fashion film Banyoloyi a Bosigo follows the clash of female gangs in a sun-scorched landscape and the violent consequences of the forbidden love between two rivals. The film, directed by Kristin-Lee Moolman, presents fashion designer Thebe Magugu’s A/W21 collection, Alchemy, and showcases the THEBE MAGUGU brand’s core values of quality, novelty and culture. Below the film – here – is a review (first published on Griot) by Italian fashion academic, Enrica Picarelli.

Banyoloyi a Bosigo [Ultimate Midnite Angels] is the fashion film that photographer and visual artist Kristin-Lee Moolman directed for South African designer Thebe Magugu’s Autumn/Winter collection Alchemy. Presented virtually at Paris Fashion Week 2021, the collection explores the influence of indigenous spirituality on contemporary South Africans. Designed with the help of traditional healers, it features visual references of practices that merge the sacred with the secular. The collection evokes personal enrichment, but also mystery, introspection, and the unknown, as Thebe enlists fashion to build a bridge to these other realms.

In fact, the making of the collection involved the summoning of ancestral forces when Thebe invited a traditional healer to perform a divination ritual at his studio. The spirits’ response, delivered via the layout of objects on a mat was photographed, abstracted, and printed on a garment, so that the collection at large can be said to carry the stamp of a spirituality that fits South Africa’s expression of modernity, a modernity which stands on pre-colonial foundations.

A tale about a transcendental, all-female realm populated by complex heroines Banyoloyi a Bosigo follows the clash of female gangs in a sun-scorched landscape and the violent consequences of the forbidden love between two rivals. There is a lot to unpack on the aesthetic level, since Kristin-Lee drew her inspiration from multiple sources, including Japanese Pink Films of the 1970s, spaghetti Westerns, and Nollywood. The B-movie feel is evident in the choice of setting (a mine dump), editing, soundtrack, acting, narrative and of course in the subject matter that centres the two matriarchal communities of Setswana and Zulu speakers. 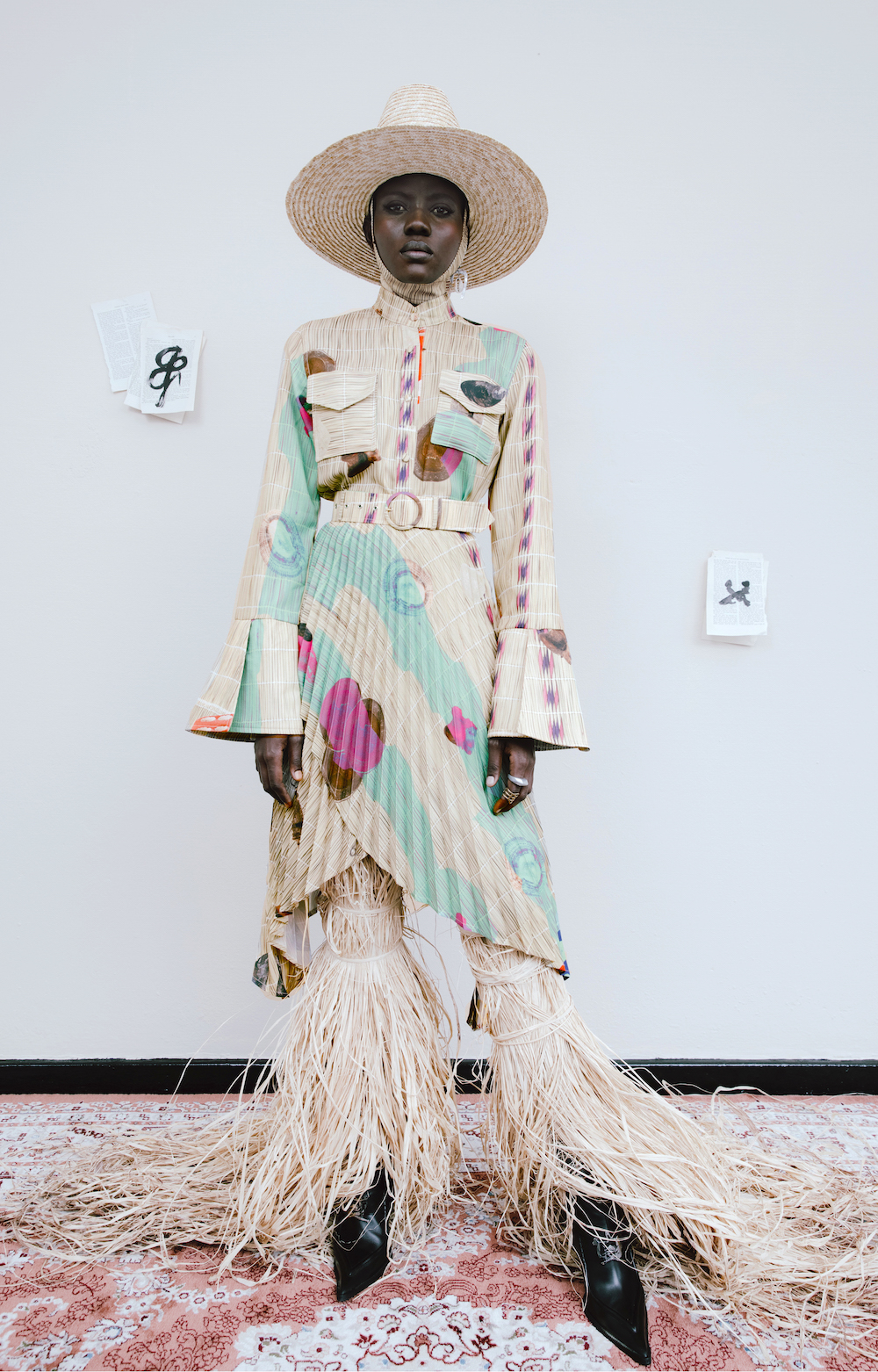 Chloe Andrea’s styling of Magugu’s garments brings the story together. The sharp tailoring, capes, and elongated shoes accentuate the characters’ fierce attitude, while the fringed hems of some dresses emphasise their swift movements in the combat scenes. Kristin-Lee explains that she wanted to convey the feverish feeling that engulfs spiritual healers and initiates as they cross the secular threshold, while presenting women as three-dimensional characters. Thebe, who himself practices spirituality, has repeatedly stressed that this experience changes people’s approach to life and should be considered as a founding element of South African resilience, especially in the face of the current crisis.

Thebe is committed to not only showcase South Africa’s cultural DNA, but uses it as a tool of collective self-assertion

Described by the titans of the industry as one of the creatives shaping the future of fashion, Johannesburg-based designer Thebe believes that South Africa has a part to play in this future, as a country with rich, but under-explored resources. His designs reflect this richness, parsing untold stories and personal experiences — from those of little-known integrationist movements like Black Sash (honoured in Prosopography, Spring/Summer 2020), to his memories of growing up in the small town of Kimberly (the inspiration behind Anthro 1, Autumn/Winter 2020 ) — to educate the public on local perspectives. His collections are presented with detailed explanations of the research done for them, as well as recommended readings that translate the abstract symbolism of the designs into material references that audiences can appropriate as their own. Thebe is committed to not only showcase South Africa’s cultural DNA, but uses it as a tool of collective self-assertion. 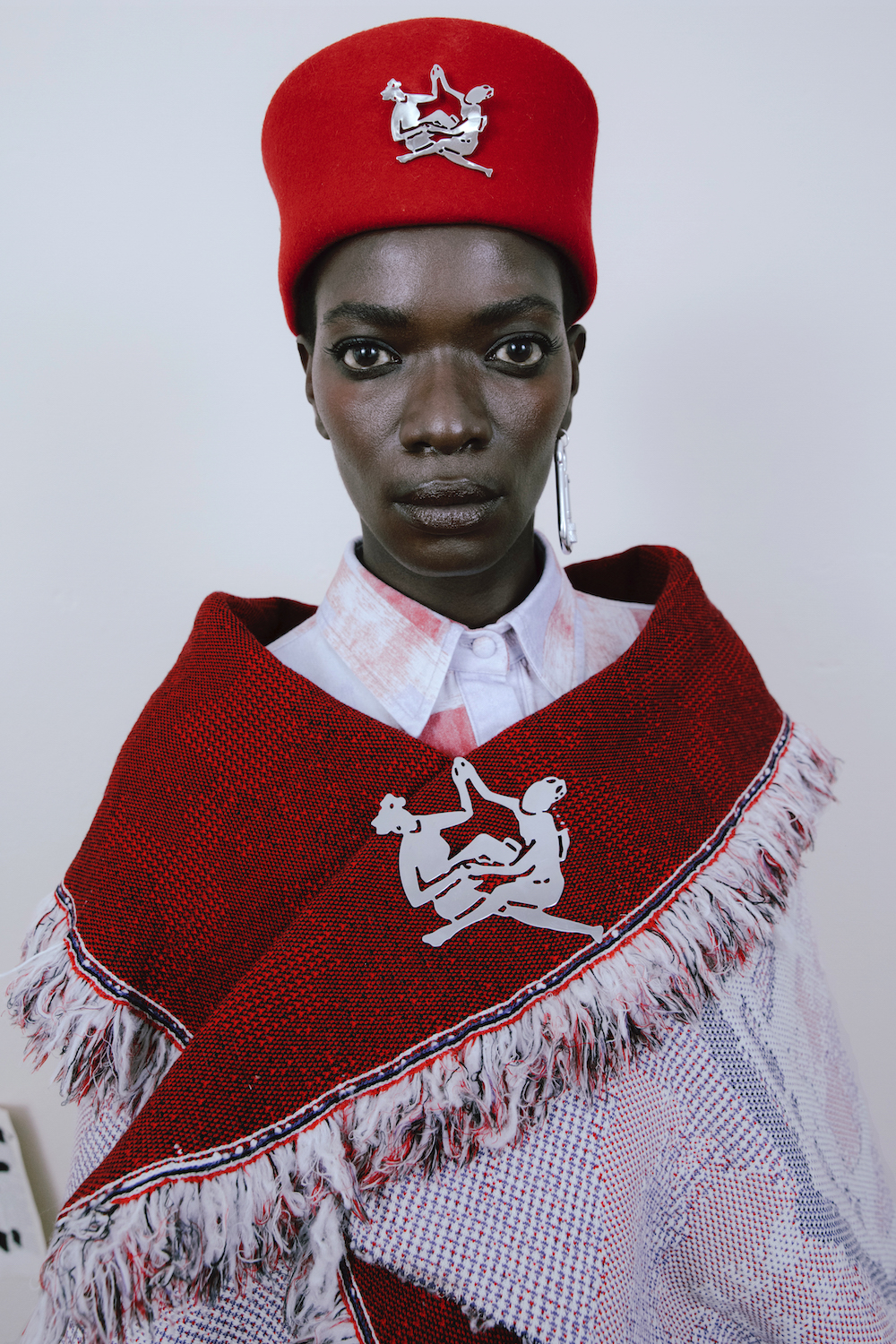 As Thebe’s long-time collaborator, Kristin-Lee is known as the rhapsodist of “indie” Africa. Influenced by her upbringing in a conservative, Afrikaaner town, she portrays non-conformist subjects who offset traditionalist views of South Africa. Her iconic works of richly-adorned individuals emerging from minimalist settings capture the plural fabric of the country, tearing apart the coat of uniformity that often mutes it. The careful styling helps to deliver a message of inclusivity and black empowerment in the face of apartheid’s long-standing legacy that earned her the appreciation of artists and creatives across the industry.

This foreign gaze relegates tradition to the past, as something backward, even primitive

Sharing the goal of ennobling diversity and uplifting the under-recognised protagonists of South African history, Kristin-Lee and Thebe have produced a film with an important socio-political message. Banyoloyi a Bosigo is, in a way, a commentary on inequality in a post-colonial world, where local forms of expression, like religion, continue to be measured against the alien standards of European culture. This foreign gaze relegates tradition to the past, as something backward, even primitive. But the film asserts that tradition is not static, but a part of the modernity that Africa has for so long been excluded from and that fashion is expected to reproduce, feeding the myth of never-ending novelty for which it has become known. It further shows what other voices of the new Africa movement believe; that when we go past the glamour of luxury and lend an ear to the stories that it tells, Afro-centric fashion is a conduit of self-enactment and a platform to envision justice and equality.

Below is a selection of images from the THEBE MAGUGU lookbook for Alchemy: 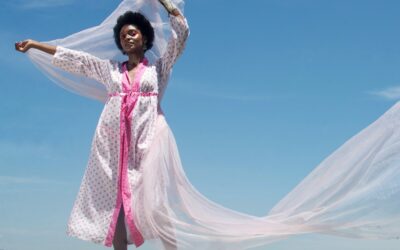 Sari for Change is more than just an upcycling fashion project

The fashion industry is one of the most polluting and wasteful in the world. After garments have been bought and worn... 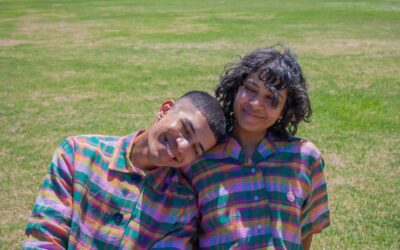 After graduating from Cape Peninsula University of Technology in 2015, U.Be.You founder and designer Ulfah Davids... 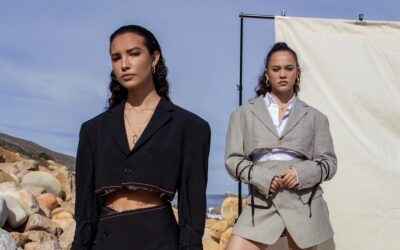 Alexa Schempers launched her sustainable fashion brand, Rethread, while she was studying in The Netherlands. The brand...